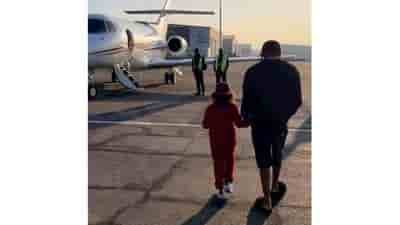 CEOs of the WCB label and bongofleva singer, Diamond Platnumz recently spoke to DW Africa confirmed buying private aircraft (private jet) with a view to what he called it to increase its value.

As he said it was true, the STA is expected to be the first Bongo artist to own a private Bird, joining some African artists like Davido, Cassper Nyoves, P Square, DJ Cuppy and Wizkid.

However, a recent study in the United States revealed hours occupying private aircraft, they participate with a high percentage polluting the environment for their aircraft to provide carbon dioxide (CO2) air for making many unnecessary trips.

The study of Driven Digital Marketing Agency (Yard) has described within one year alone an American staa due to the use of its aircraft produces 3,376.64 tons of CO2 which is more than 482.37 times its emissions to a public aircraft that produces only seven tons a year.

Diamond whose wealth is estimated at110 million, an average of Sh23.3 billion emphasized immediately after buying a luxury car type Rolls-Royce Cullinan last year at a price of Sh2.3 billion, now it turns private aircraft, which for his claims has bought it.

In an interview with the “the Switch” sanitary FM, Diamond said he buys a private flight to simplify his flights, meaning there are times when he gets a sudden trip and forced to hire private flights where it is expensive.

Speaking to this newspaper, a pilot from the Tanzanian Airlines (ATCL), Captain Brian Wamala said the biggest benefit of a private airliner is to plan his own flight time, but he should be more economically organized.

“Substantially it becomes the convenience of a trip, he becomes unplanned, he himself plans his time of the trip, it is a great thing to own a private plane, especially for a person with many distant trips owns his own time.

On the possibility of renting the aircraft, Captain Brian said it is a possible business if he obtains a lease license, adding that he will be able to travel abroad, although his expenses are high!.

” It’s a good thing, but he must be well organized, because his expenses are not childish, they are high for everything, from ownership, fuel, to employees ‘payment, so the costs are high,” he said.

Read Some Jobs in Tanzania

Commenting on Diamond owning a private bird, veteran of Bongofleva, Joseph Mbilinyi ‘ Mr. IRA’ ‘resistant’ who is the first Bongo artist to own a Honda Accord Inspire after selling his album, ‘Outside of Bongo’ (1999), said it’s a good thing for the country but he will talk more when it’s landed!

” It’s really a good thing, but my opinion I’ll give when he comes with it, I’ll give you a positive opinion, it’s a very good thing but I ask me to keep my opinion until it’s finished, ” he said.

It should be noted that apart from the artists, also African professional football players, who successfully went to strike Europe many of them have private aircraft, including Diamond Friends, Samuel Otto’o and Didier Drogba.

Driven Digital Marketing Agency( Yard), which conducted research on private airline coz, mentioned ten hours in the United States who use more private air travel and pollute the environment.