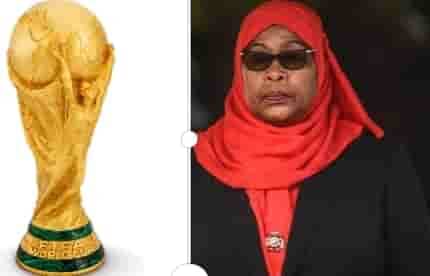 The president of the United Republic of Tanzania Samia Suluhu Hassan expects that she will receive the World Cup on May 31, this year as a special strategy to announce Tanzania.

The Tanzania football federation (TFF) has said that the Tanzania Football Federation (TFDA) has been urged to take part in the league’s soccer league to be held at the National Stadium in Dar es Salaam yesterday.

He said the coming of the Cup shows how the world football federation (FIFA) recognizes the major efforts being made by Tanzania in sports during this period and urges Tanzanians to appear in abundance on June 1, 2022 the National Stadium in Dar es Salaam for seeing and photographing.

He said the sixth phase government headed by President Samia has revolutionized sports in a short period of time because it believes that sports are a big business that produces jobs and that stimulates the economy of the country as a whole.

He added that in continuing to announce Tanzania’s international government in this period has ratified the coordination and funding of the African Football Federation’s General Assembly to be held in Arusha which will be attended by more than 54 countries along with the main leaders of the federations and major sports parties including FIFA President.

He said the meeting is taking place in Arusha which is a tourist center in the country, which will help open the doors to announce various tourist attractions to visitors who will participate in the meeting.

He said the government is committed to organizing modern sports infrastructure to coordinate the African Cup of Nations competition in the country where he has asked the Coca Cola Company to appear to cooperate with the government to build stadiums yakaokidhi wishes to hold the international tournament.

“I recognize your contribution to sports and announce Tanzania as a whole I would like to use this opportunity to urge Coca Cola to participate actively in the construction. We need three stadiums so that we can organize this tournament” defines Hon. The Czech Republic.

He instructed the director of Sports in the country, Joseph Singo to ensure the Ministry is cooperating with Coca Cola to create an advertising system at Benjamin Mkapa Stadium that will be leased to launch ads to various companies.

He has also ordered the Sports Department, the National Sports Council (NSC) and the TFF Football Federation to find Tanzanian players playing in the world’s biggest teams to create the best national team that will be able to do better at the international tournament.

For his part, the Director General of Coca Cola First Tanzania, Unguu Sulay, a company that sponsors the coming tour of the Cup in Tanzania said it is among the few countries that have received the honor of visiting the Cup and promising to work closely with the ministry.

TFF President Wallace Karia has congratulated the government for improvements in sports sectors of the country while explaining that the Ministry has been working closer to stakeholders than before the situation leads to a better start in sports.